By Edward Gryspeerdt
- Mon 11 July 2022
Link to paper: The impact of sampling strategy on the cloud droplet number concentration estimated from satellite data

How many droplets are there around the world? In a single cloud?

The short answer: A cloud usually has between 50 and 300 droplets per cm3

The long answer: It depends, so we need to count them

Knowing the number of droplets in a cloud it vital to determine the brightness of the cloud and so its impact on the climate, but can also help us understand how the cloud will change over time and help us measure whether compliance with international regulations. Measuring the number (or concentration) of droplets in a cloud (Nd) turns out to be surprisingly difficult.

Measuring the cloud 'in person'¶

The most accurate way is to measure the number of droplets in a cloud is to go up there in an airplane and have a look. While you could use a microscope, most aircraft measure clouds by using lasers shine across a small gap. When a droplet flies through the laser, it changes the light received by a detector and this is used to count the number of droplets in the cloud [1]. 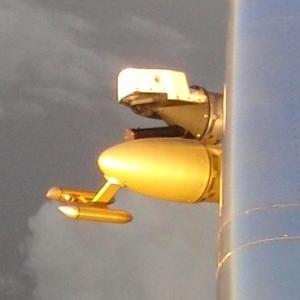 The Cloud Droplet Probe (CDP) on the wing of the NSF/NCAR Gulfstream-V (HIAPER). The laser doing the measuring is between the two prongs coming from the bottom of the instrument (NASA Airborne Science).

While these measurements are very accurate, they only measure a small part of the cloud, and only at the moment the aircraft flies through it. If we want to count cloud droplets globally, we need to use satellites.

The average cloud droplet is 10um across - to see it from a satellite orbiting at 700km is the same as seeing the dimples on a golf ball on the Moon [2]. Luckily, we don't need to see the droplets directly to measure them, we can look at how they affect light. 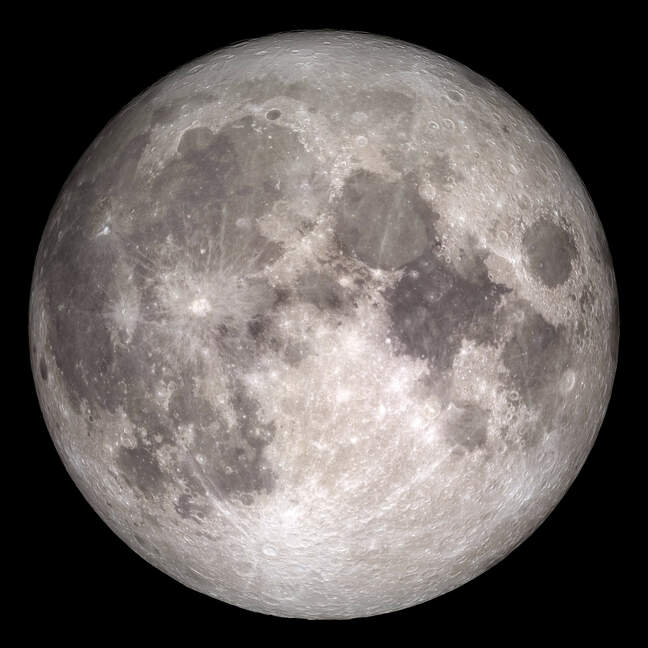 The Moon - can you see the dimples on the golfballs? This is already zoomed in, so it should be easier!

If we think of cloud droplets like little mirrors, the amount of light reflected by a cloud is larger if the cloud has lots of mirrors (droplets) or larger mirrors. If we measure how much light a cloud reflects, we then have a piece of information about the size and number of droplets, but all mixed up together. 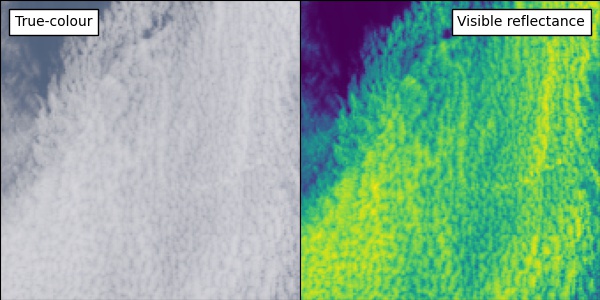 The visible reflectance shows how bright the cloud is, which tells you a bit about the droplet number mixed in together with the droplet size. There is a change in droplet size in there, but you can't see it yet.

But we can't count just the number of droplets from this, a cloud could be made of a large number of small droplets, or a few large droplets and reflect the same amount of light, we need some extra information! 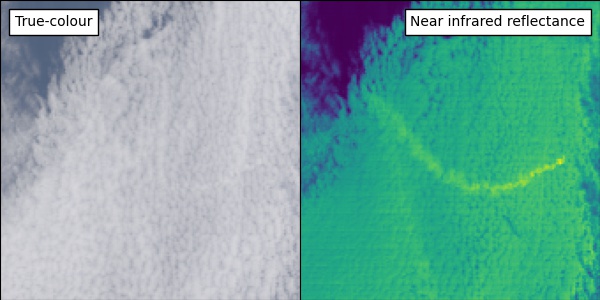 The near infrared reflectance is very sensitive to droplet size. The shiptrack in this image, with lots of smaller droplets, stands out really clearly in infrared, despite being almost invisible in the visible image.

As with a lot of things in science, we need to make some approximations. We assume that the cloud doesn't mix any air with its surroundings. We call this 'adiabatic'

This is obviously not realistic, as all clouds mix with surrounding air, but if the cloud is very wide [3], the we can assume most of it only mixes with other bits of cloudy air, which is good enough. 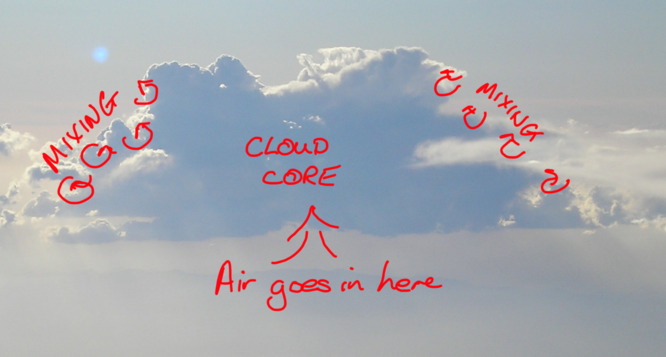 Air mixes into cloud sizes as the cloud rises. Eventually this slows the cloud down and stops it rising. This cloud is not adiabatic (as it is mixing with the surroundings), but it gets close near the cloud core.

This has two important consequences:

Together, this means that for an adiabatic cloud (one that is not mixing with its surroundings), if we measure the size of the droplets at the cloud top, we know how big the droplets are all the way through the cloud!

So it turns out all you need to know to calculate the number of droplets in a cloud (Nd) is how reflective the cloud is and how big the droplets are the cloud top. You could count cloud droplets on Earth from the other side of the solar system if you wanted to - pretty cool!

All of this means that we need to have a good way of finding adiabatic clouds (as those are the ones where we can calculate Nd). There are a couple of ways proposed to do this:

Amazingly, it turns out that all of these methods are pretty good, even method 1 (just use all clouds). Given that the satellite has to assume the cloud is adiabatic to estimate Nd (and we know most clouds are not adiabatic), this is probably because lots of different types of errors (luckily) cancel out. 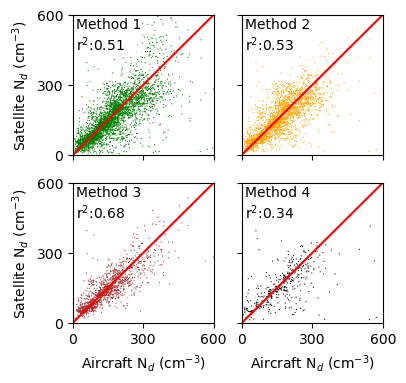 Satellite and aircraft measured Nd match surprisingly well, given all the assumptions the satellite has to make about the cloud! Method 3 is usually the closest match, but method 4 is good for some cases (as long as it is definitely not raining!) The r2 value is a measure of how well the satellite data matches the aircraft measurements.

Method 3 is usually the best, although it only works in a few places as it requires very specific conditions for the cloud. It produces some really amazing correlations with aircraft data. If you average over 100km regions, this correlation rises to almost 0.9 - satellite retrievals are never normally that good!

Method 4 is really good for stratocumulus clouds. However, if there is any change the cloud might be raining, method 4 will target the rainy parts of the cloud to calculate Nd (as these parts of the cloud are usually quite thick). If a cloud is raining, it leaving water behind in the surroundings - that is definitely not adiabatic! This means that method 4 will tend to fail and produce bad measurements when there is rain.

However, the satellite does a pretty good job of estimating the number of droplets in a particular cloud. But how many droplets are there on Earth in total?

How many droplets are there around the world?¶

Counting droplets worldwide is a bit harder. Method 3 is very good at making accurate measurements, but it measures only a small subset of clouds. Are these clouds representative of clouds as a whole?

It turns out that method 3 tends to overestimate the total number of droplets. You can see this in the scatter plots above, where method 3 has very few low Nd cases compared to method 1.

Method 2 (use all possible 'good' Nd measurements) seems to work better for measuring the total number of droplets in clouds around the world. We can use this to make a map.

The distribution of cloud droplets around the globe from method 2. This is the average number - the Sahara doesn't actually have that many droplets (as it doesn't have many clouds). Notice how there are lots of droplets over China, Europe and the USA, due to the concentrations of industrial activity in these locations.

With our new map of cloud droplets around the world, we can estimate how many droplets there are in total on Earth at any one time. To calculate the total number, we need

Using our new Nd map, we can make a more accurate calculation. This gives us a total number of cloud droplets on Earth at just under 1025 at any one time.

This means there are about the same number of cloud droplets on Earth as stars in the observable universe! [4]

This article is based the article 'The impact of sampling strategy on the cloud droplet number concentration estimated from satellite data', which is available to read for free. Thanks to Daniel McCoy (U. Wyoming), Ewan Crosbie, Richard Moore, David Painemal, Luke Ziemba (NASA Langley), Graeme Nott (FAAM), Jennifer Small Griswold (U. Hawai'i at Manoa) and Armin Sorooshian (U. Arizona), who worked with me on this research.